Acentric
Published in Retail · 12 December 2016
According to a new survey completed in the first week of December, Takealot and Edgars are likely to be the most popular online retailers for Christmas 2016. The survey also revealed that almost a quarter of South Africans have reservations about shopping this Christmas. The survey was conducted by Acentric Marketing Research (Pty) LTD, using both online and telephonic survey modes (see technical note).
Nationally, 24% of South Africans are not likely to shop specifically for Christmas this year. As of early December, 36% still intended to complete their Christmas shopping, while 40% had already finished. Of those South Africans with internet access, almost 63% planned on shopping both online and at physical stores, while 35% intended on only shopping in physical stores.
“Around 55% of those with internet access expected to have to increase their spend this year on Christmas shopping, with 27% spending the same and only 15% expecting to be to spend less. An average spend of R4,300 is expected this year amongst internet enabled South Africans.” says Craig Kolb, MD of Acentric. 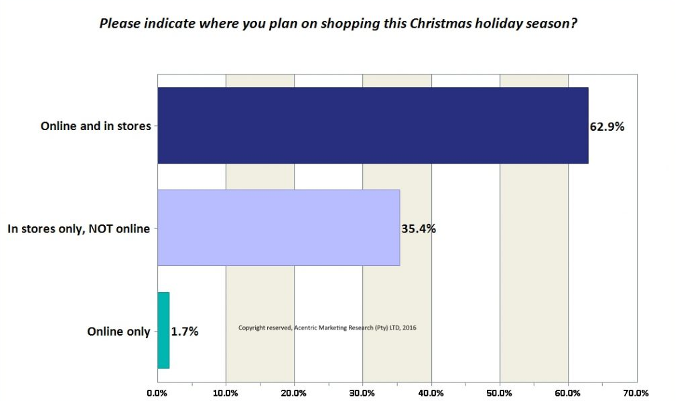 Takealot took the lead as SA’s most popular online retailer. “Takealot has grown immensely since this was last measured in 2012. I believe the takeover of Kalahari benefitted the brand tremendously. Many consumers still seem unaware of the takeover, however, as 16% of consumers still intend purchasing from the Kalahari brand.” says Kolb.
Takealot was followed by Edgars, Amazon, Zando, Pick n Pay, Makro and Woolworths. “Another notable result is the rise of the brick and mortar retailers. In 2012, traditional retailers hardly made a dent, bar a few supermarket retailers. Now everything has changed. Most notably Edgars, Pick n Pay, Makro, Woolworths, Dischem and Mr Price have now made large inroads into this space. I will know more once a more detailed post-Christmas survey – for the Online Retail Brand Report – is completed next year.” says Kolb. 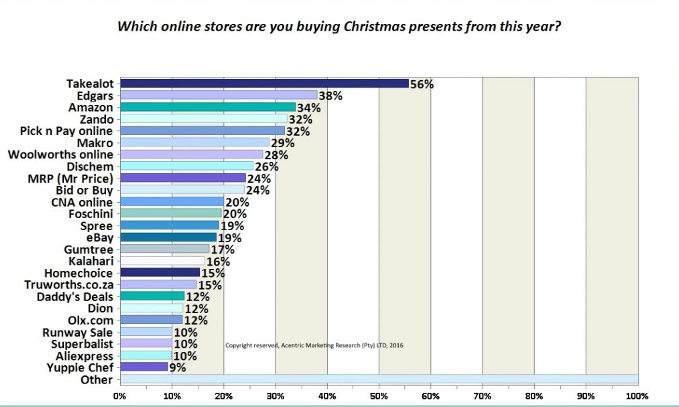 Technical note: An online-panel survey using an ISO 20252 panel was conducted during the late November, early December period. Post-weighting was applied to provide approximate representation of the SA online population in terms of age, gender, ethnic group and household income. Depending on the questions, between 347 to 223 participants responded, yielding margins of error between 5.3% and 6.6% respectively, at a 95% confidence level (unadjusted for design effect). Average spend figures were rounded to the nearest R100.