Acentric
Published in Advertising research · 15 September 2011
Tags: Advertising, research, augmented, reality
In the May 2011 issue of Car Magazine a new type of advertising was introduced, augmented-reality print advertising. The advert in question was a double-page spread, advertising a Mercedes CL63 AMG. It combined print with online content in a novel way. A picture of the interior of the car was shown with instructions on how to access the online content via smart phone, printed in the rear-view mirror. The reader was asked to browse to the site and to place their smart-phone over the rear-view mirror so that a simulated view of what to expect in the rear-view mirror could be shown (i.e. an aggressive motorist tailgating and flashing lights – code for the Mercedes driver to move out the way – instead the Mercedes driver accelerates away).
Acentric conducted an ad test with 79 members of the Acentric online panel, in order to examine the adverts performance. 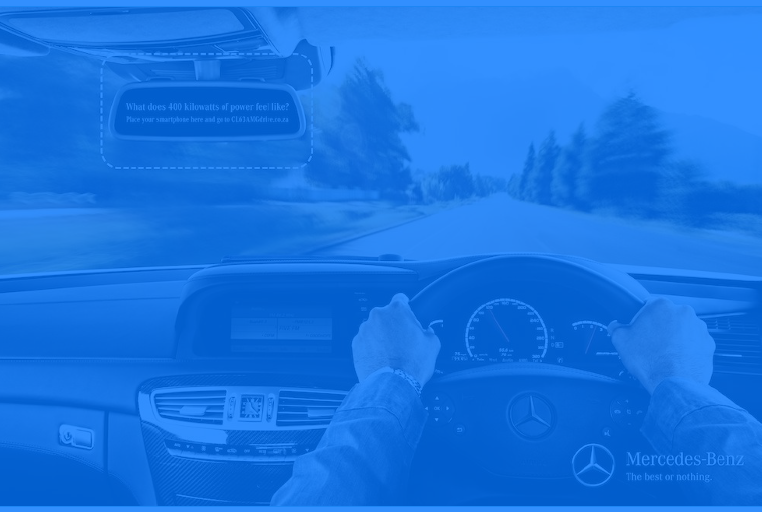 How effective was the ‘augmented-reality’ aspect?

Ability to get attention

One of the nagging doubts about the likely effectiveness of augmented-reality print adverts is the additional effort required to fully appreciate such advertising. To test the performance of this aspect, we exposed respondents to the advert, and made sure they had the details necessary to access the video. At the same time we asked various questions that would focus their attention on the advert. Survey respondents were then asked if they had watched the video (they were asked this on the next page, at a point where they could not go back again to retrieve the video access details).
In order to improve the accuracy of the result the question was disguised as a recall question about a detail in the video, with “I didn’t play the video” being just one of the response options. Under these fairly ideal conditions, approximately 63% appear to have played the video. A fairly impressive statistic, however it should be born in mind that in the real world this is likely to be lower as not everyone will have access to a smart phone, and there is no doubt that the novelty value of such adverts will begin to wear off.
That said, augmented-reality print ads could be a useful way of providing additional information to those consumers who are more involved in the category and therefore more likely to go to the effort of accessing online content. An indication of this, is the fact that 72% of males accessed the video, versus 54% for females.
An additional advantage, is the opportunity to combine an emotional appeal with a fact based/rational appeal in one advert. This should broaden the relevance of augmented-reality print adverts, meaning they are likely to provide better return on investment.

Brand linkage was strong, 86% recalling that it was a Mercedes advert.

What message was communicated?

Overall: Power, speed, comfort and mileage were the predominant themes. When a comparison is made between those who accessed the online content with those who did not, it becomes clear that augmented-reality print ads have great potential as enablers for combined appeals – different appeals can be targeted at different audiences.

Two different element variations were incorporated in a quasi-experimental design to estimate element importance.
Versions with colour rather than black and white were proven more effective, while price information would have a more positive impact on attention scores, than excluding price information. The model suggested that adding price details would have mitigated the impact of black and white, so providing a way to reduce advertising costs.

The most popular suggestions for improving the advert were: Improving picture quality, showing
more of the car and including attractive girls/women as part of the advert.

In summary, it appears augmented-reality print ads have good potential, and with careful design and
execution should improve the performance of print ads. It is expected that the primary mechanism
would be via broader appeal, as more than one appeal can be combined within one advert. In
particular, the traditional print ad can be used for emotional appeals while the augmented aspect
can be used to target more involved consumers – with either emotional or rational feature oriented
appeals. Of course, the targeting mechanism depends on the ability of the advert to get attention
and depends on an inherent division in the target audience in terms of category involvement.
Therefore, it stands to reason that such adverts are more difficult to design and execute and so
would benefit from the additional guidance provided by advert pre-testing surveys.