Acentric
Published in Retail · 5 December 2015
Tags: Toys, Christmas, survey
Acentric’s latest survey identified Barbie and Frozen are the most desirable toy brands for girls in SA. For boys, cars and PlayStation game consoles are most popular. This is according to a new survey conducted by Acentric Marketing Research (Pty) LTD at the end of November 2015. The survey was representative of South Africans in metro areas in terms of age, gender, ethnic group and household income (see technical note).
Almost 90% of consumers surveyed intend or have already completed Christmas shopping this year. Amongst those parents buying presents for their children this Christmas, 60% expect to purchase toys. This was followed video games (31%), mainstream clothing (20%), personal electronics (19%), designer clothes (18%) and books (17%).
Amongst girls, dolls as a category top the list in terms of desirability. In terms of specific brands, Barbie and Frozen are reported by parents to be the most desirable brands this Christmas. “Barbie still manages to stay near the top of shopping lists, even though the brand is now more than 50 years old.” says Craig Kolb, MD of Acentric Marketing Research (Pty) LTD.
Amongst boys, the car category leads the way; with no particular toy brand or franchise standing out. In terms of specific product brands, the Sony PlayStation PS3/PS4 range of video-game related products was mentioned most frequently. “For Christmas 2015, PlayStation appears to be a more popular choice than XBOX and Nintendo.” says Kolb. 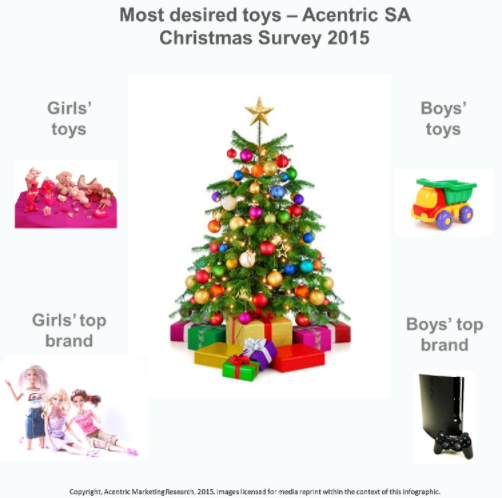 Another interesting finding relates to the divide between rich and poor South Africans this Christmas. The majority in SA’s top income bracket anticipate spending more on Christmas presents this year than they did last year, with average spend for the group standing firm in the face of SA’s economic problems.
“Approximately 57% of those in the top income bracket – defined as those earning more than R50,000 per month – were ready to spend more on presents this year; compared with 31% in the income bracket below. Survey participants in the top bracket now budget an average of R8,400 for Christmas presents – slightly more than that claimed in the previous period.” says Kolb.
Consumers in the top income bracket were also able to complete their shopping more quickly this year. “Approximately 32% of those in the top bracket had already completed Christmas shopping at the time of the survey, while only 15% of those in the R5,000 to R49,000 income bracket had done so. This may indicate greater uncertainty regarding available budgets, many it would seem are holding off on purchases until closer to Christmas day; possibly to reduce the risk of budget shortfalls. This has implications in terms of how retailers should stock and promote during the Christmas season. Promoting and discounting more affordable items closer to Christmas day may make sense.” says Kolb.
Those in the lowest income bracket – earning below R5,000 per month – are clearly suffering this Christmas. “Sadly one fifth do not intend on shopping for presents at all this year in the lowest bracket.  On average approximately R1,600 is budgeted for spend on Christmas presents in this bracket, not discounting over claim. In part this spending may take the form of everyday necessity purchases, such as food, re-tasked as gifts.” says Kolb.
Technical note:
An online-panel survey using an ISO 20252 panel was conducted during November 2015. Post-weighting was applied to provide approximate representation of the SA metro population in terms of age, gender, ethnic group and household income. In total 300 interviews were completed yielding a 5.6% margin of error at 95% confidence level. Average spend figures were rounded to the nearest R100.