Acentric
Published in Brand · 7 June 2010
Tags: Brand, country
A new study shows that South Africa’s international reputation declined significantly between December 2009 and June 2010. Perceptions of SA immigrants living in the UK and the SA government took a knock along with intentions to visit the country in future. Confidence in the ability of the country to host the World Cup is also low.
Only 14% of the public in the United Kingdom agree that South Africa has a good-overall reputation, relative to other developing countries. This is according to a survey by South African marketing research consultancy Acentric, conducted between the 2nd and 7th of June 2010. This represents a statistically significant drop from the 21% agreement recorded in December 2009. 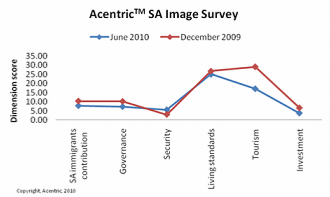 Specific dimensions which recorded a decline include perceptions of the SA government, perceptions of SA immigrants (living in the UK), tourism intentions and investment intentions.
“While perceptions of SA governance and investment intentions dropped in June 2010, these changes did not reflect a statistically significant drop on any of the underlying measures. However the drop in the perceived contribution of SA immigrants to the UK, along with intentions to visit SA as a tourist did reflect a significant drop on some of the underlying measures.” says Craig Kolb, Managing Member and Owner of Acentric Marketing Research.
“Given that the UK is still the leading foreign investor in South Africa and also the leading source of overseas tourists, it is of some concern to see SA’s reputation decay even further in that country. Hopefully the situation will improve after the World Cup. Approximately 31% of survey respondents stated an intention to watch the World Cup on TV which offers South Africa an opportunity for increased exposure. ” says Kolb.
Perceptions of SA’s ability to provide good living standards relative to the EU are unchanged, while perceptions of security improved (but not significantly) over December 2009.
Lastly, perceptions regarding South Africa’s ability to host the World Cup are still poor.
“Overall, 25% agree that South Africa will do a good job hosting the Cup, which is slightly lower than in December but not significantly so. Hopefully this perception will change once the Cup is under way.” says Kolb.
Technical note: The June overall-reputation score has a margin of error of 4.3% (at a 95% confidence level). In total 256 individuals were surveyed within England, Scotland, Ireland and Wales in December 2009 and 250 in June 2010. The results are representative of the UK population.
Affiliates