Acentric
Published in Economic & social issues · 29 February 2012
Tags: Direct, democract, Swiss, democracy
A survey conducted by Acentric in 2012 showed that the majority of South Africans are in favour of direct democracy.
Currently South Africa is a representative democracy, the most common form of democracy in the world.
In total 312 respondents were interviewed. Respondents were weighted to ensure the sample was representative of the metro regions of SA in terms of age, gender and household income.

Survey respondents were introduced to the principle of direct democracy with the following statement:
SA has a 'representative' system of democracy, like the USA and Britain. This means once politicians are voted in, they essentially can do what they want for 4 to 5 years until voted out.
In contrast, Switzerland has a direct democracy. This means that the people have direct control over the government every single day. The people can stop legislation they don't like, and can remove politicians they don't like, using a referendum system, that is activated once a few thousand signatures are collected.
Some of the unique aspects of Switzerland:
· Switzerland was not affected as much as other European countries during the credit crunch.
· Switzerland has the highest innovation rate in Europe.
· Switzerland has one of the lowest tax rates in Europe.
· Switzerland has one of the highest income levels in the world. 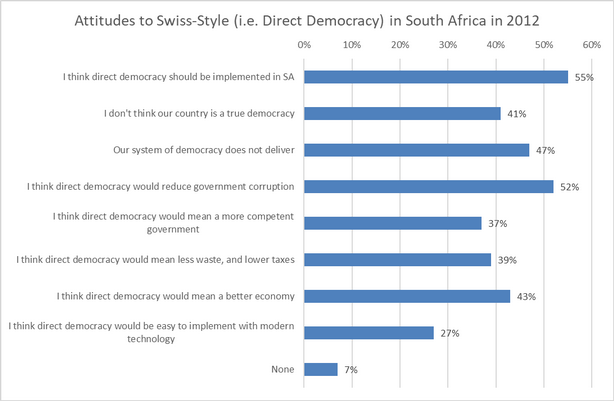