Acentric Blog
Published by Craig Kolb in Research application · 14 July 2016
Tags: Search, time, on, shelf
By Craig Kolb, Acentric Marketing Research (Pty) LTD, 14 July 2016
A new study conducted by Acentric highlights the importance of package design in ensuring product packages are found on cluttered store shelves.
Acentric conducted an online-panel survey of 251 wine consumers in May 2016 to test the impact of search times for different wine bottle designs on a cluttered shelf. In total data was gathered for four different wine bottle designs. Each wine bottle (I will refer to these as packages for the rest of this article for the sake of consistency ) was placed in the same position on a virtual shelf. The shelf contained a standard set of packages; designed to simulate the clutter found on store shelves.

The experiment in brief

An experimental design with four different cells was used, with monadic exposure (i.e. in isolation without the other three). Monadic exposure ensures each package design is not interacting with the other package designs and that learning effects are eliminated. Each survey respondent was shown only one of the four packages, and asked to find this on a virtual shelf. Consumers were randomly allocated to each experimental cell.

Outliers were removed prior to analysis. The search times were then evaluated for significant differences. Since parametric assumption violations occurred, a Kruskal-Wallace test was used instead of a one-way Analysis of Variance (ANOVA). Ties were not likely given the continuous nature of the data and sample sizes, and this was confirmed by comparing the unadjusted result with the result adjusted for ties. The medians were compared and the null hypothesis of equal medians was rejected (0.05 level), meaning that at least one of the pairs had significant differences.
In order to identify significant differences between specific pairs of package designs, a Kruskal-Wallis Multiple-Comparison Z-Value Test was used. Package D, was significantly worse than each of the three other packages, with a median of 12.5 seconds. In comparison the best performing package (package B) had a median search time of 7.59 seconds. Package B’s median time was not significantly different from product packages A & C. These results were also confirmed using the stricter Bonferroni correction, which reduce experiment-wise Type I error.
Box plots are shown below of the results. As can be seen, package B not only had the lowest median time, dispersion of times is lower (they are more tightly bunched around the median). In particular the interquartile range is noticeably smaller than A and D. Package C is similarly distributed.
Figure 1: Time taken by consumers to find each package 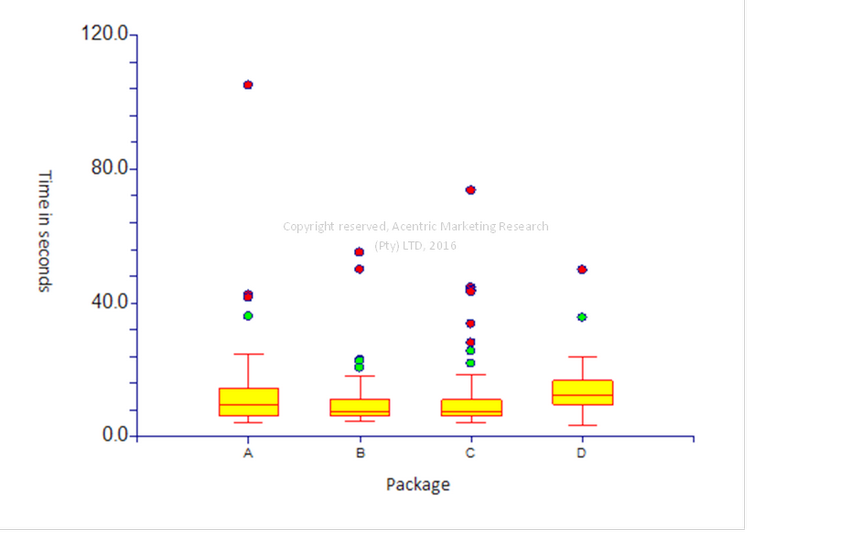 In short, the results of this experiment show that better package designs not only reduce the median time, they improve the experiences of consumers across the board. Consumers with poorer eyesight and those paying less attention are less likely to be thwarted by clear, distinctive designs that stand out against the background noise of store shelves.
Going beyond this simple experiment, other research has shown that factors related to how the shelves are packed also affect search times. For instance, untidy shelves increase search times as the consumer’s cognitive load is increased; eliminating and filtering irrelevant packages. Additionally packages displayed at odd angles delay recognition. Another factor to consider related to shelf packing is the area taken by a specific brand on shelf. The same package – provided with four spaces on the facing is likely to perform better when this increases to eight spaces horizontally, and even better if it takes up multiple rows.
Copyright reserved, Acentric Marketing Research (Pty) LTD & Craig Kolb, 2016